Last weekend I rubbed shoulders with Mika Hakkinen at Laguna Seca, booked a trip to Austin for the USGP, moved into first place of my hotly contested racing fantasy league and watched an amazing Indycar show at the tricky triangle.  The previous weekend I was inspired by the Marquez/Dovi duel at the Red Bull Ring and Kyle Larsen’s mind melting feat of 2nd at The Knoxville Nationals in a 410 Winged sprinter on a Saturday night and 1st the next day in The Cup race at Michigan.  And do I need to remind anybody that Spa is this weekend?  I guess what I’m trying to say is motorsport has found it’s way back into my heart and I’m feeling the need to peck the keys and preach the good word.

Motorsport, This song’s for you!

So where do I start?  I have such a blank canvas to work with here.  Because modern motorsports takes quite a bashing on a regular basis, I’ll begin my soliloquy with all the good that exists out there.

We have a legit title fight on our hands in F1 between Vettel and Hamilton!  We’re talking Ferrari vs Mercedes.  Two drivers at the top of their game with a combined 7 world titles already in their trophy cases having at it not just to be the 2017 champion, but to improve upon their place in the Pantheon of the Greats.  Lewis has been sublime on Saturdays with 6 poles to Vettel’s 2, but Seb has been the more consistent operator of the two when it counts and they are currently level at 4 wins apiece.  They started the year a little too friendly towards each-other for my liking, but after rubbing wheels at Barcelona and Lewis then giving Seb the infamous Baku Brake Test, which brought out another episode of “Seb’s Gone Wild” from the normally happy go lucky German, it’s now game on for the final 9 races.

Fernando Alonso!  You would think that with a best finish of 6th in 11 races and a DNF at Indy, this year would be considered a complete and utter catastrophe for the Spaniard.  While it must be incredibly frustrating to be in Alonso’s shoes, his reputation as the best in the business has actually gained momentum.  His entire month of May at Indy was just a thing of beauty.  He quickly assimilated to the hang loose world of Indycar and was peddling that cool looking McLaren-orange Dallara like a seasoned Brickyard vet in a matter of hours. In the race he was going to be right there at the finish if it wasn’t for yet another Honda, albeit a HPD built motor, going kablamo and leaving him walking back to the paddock to a rousing standing 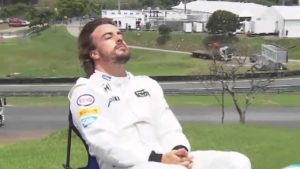 ovation from the locals  In his regular job, ALO has crushed his highly regarded rookie teammate Stoffel Van Doorne, climbed into a grandstand in Montreal to chill with his peeps after a DNF, set the fastest lap of the race in Budapest and then stole the parc ferme show by reenacting a scene from Brazil last year when he decided to sun himself in a lounge chair after being stranded out on track yet again.  Bravo Mr Alonso for showing us your prodigious skills and newfound sense of humor.

Sato wins Indy!  If you have been a regular reader of this blog over the past 5 years, you will know the great admiration that I have for Japanese F1 drivers of the past.  When pressed for my top 5 of all time, Sato is #2 behind the almost mythical Ukyo Katayama.  Witnessing Sato make an outside turn 1 pass stick in the closing stages of The 500 and cross

the row of bricks to take the checkered flag was certainly the high point of my season and something I will not soon forget.

Robert Kubica is back!  No not back in a rally car or touring car or some wacky WEC prototype, Kubica is back and ready to resume his F1 career that was tragically cut short six years ago.  After what at first seemed like a publicity stunt by the Renault team to give their former driver a go in a 2012 machine at Valencia, Kubica stunned when he immediately got down to business and made easy work of their regular test driver on hand with no ill effects from the injured arm.  Things really got serious when Kubica was called into the post Budapest test a few weeks back in the 2017 car and he acquitted himself very well.  Considering that he had never sat in the car prior to the test, he was able to do a couple of race distances without putting a wheel wrong and proved that if he can 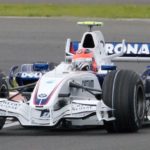 handle the Hungaroring, then he’s fit to go.  We at Bulseyeview are hoping and praying that Renault does the right thing and hires the Pole for 2018.

Indycar has a 5 man battle for the title with 3 races remaining and a new bonafide American star!  The Newgarden/Penske combo has the look and feel of a budding dynasty and Jo New’s pass on Power at Mid-Ohio must have made Nigel Mansell drop his 5-iron and applaud.  That fake to the left and cross-over to the right was right out of the Nigel playbook.  Alexander Rossi is also looking like Honda’s favorite son so we may soon see the day of Rossi in a Honda vs Newgarden in a Chevy fighting for Indy glory.  It will be Mikey vs Little Al, Mears vs Sneva, AJ vs Parnelli all over again.  On second thought……..

Like Indycar, MotoGP also has a 5 man battle for the title with plenty of races still on the calendar!  Marquez, Maverick and Dovi each have 3 wins while Rossi and Dani P are hanging around and staying within striking distance.  Johann Zarco has also shown that he is a man to be reckoned with in the future with a few brilliant rides.  These riders are the last of the maniacs in motorsport and we are lucky to have them in our midst

Other good things worthy of a mention:

Hands down, the most disappointing aspect of the 2017 season is Red Bull’s lack of pace.  If we were treated to Max and Ricciardo mixing it with the Mercs and Ferrari’s on a week in and week out basis, this season would be epic.  I really do think that these two drivers are the key to take F1 to the next level.  Max is like a ticking time bomb ready to go Senna all over us and Ricciardo is the right there in the Lewis, Alonso, Vettel class.  They started the season about 30 seconds slower over a race distance and have more than halved that gap, so if we can just find a few more tenths here and there then they are going to make life miserable for the boys in Silver and Red.  Tickets to Spa are sold out with the Max Army arriving in force so one can only hope that the game begins on Sunday.

Seb Bourdais breaking his pelvis while attempting to qualify for The 500.  Leading up to Indy, Bourdais had been the feel good story of the year for Dale Coyne Racing.  Reunited with his engineer Craig Hampson from their glory days at Newman Haas, they started out the year with amazing strategy calls and won at Homestead and then followed it up with a 2nd at Long Beach.  At Indy, Bourdais had a rocketship and would have likely been a contender for the Borg-Warner trophy until his wicked crash put an end to his season.

Quick Easy Quiz to see if you are paying attention: (see answers at the bottom)

A couple of other bad things to mention:

A final thought.  Every week it seems like a new major manufacturer is planning to join Formula E.  This almost feels like the manufacturer led breakaway series that we were hearing about a few years back.  The current on track product certainly doesn’t merit being considered a threat to F1, but when you see that Mercedes is dropping the DTM to go electric racing, Porsche is disbanding their Le Mans program to join the fray, BMW is on board, Jaguar, Renault, etc., suddenly this becomes a big deal.  The manufactures will want to win, drivers will want to get paid and the big independents like McLaren and Williams may see this as a new revenue stream for their coffers.  Even Ferrari is turning to hybrid technology for their road cars.  So what if we suddenly see a Max Verstappen or Daniel Ricciardo decide to spearhead a Porsche or Mercedes entry for top $$?  Will that start the fan migration over to the E-side?  I currently don’t watch E but do closely follow their results because the driver lineup is very impressive.  I would say top to bottom, FE is  is on par with Indycar at the moment.  If suddenly a few major stars are in the field, my curiosity would be too much to resist.  Say what you will, but my estimation is 70% of the people who are sitting in the grandstands or watching at home are doing so because of their allegiance to the drivers.  I want to see the best, so if suddenly the best are in FE, that could spell big trouble for F1 as we know it. 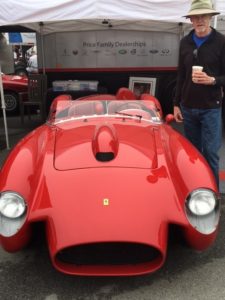 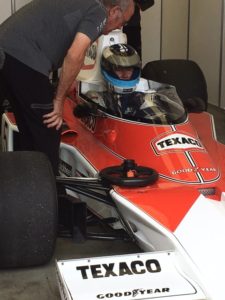 You Sure You Want to Do This Mika?