On a day when the first pitch of the Word Series will be tossed, the first tip of the NBA season is hours away and football is on 5 night per week, it’s easy for the motorsports world to get pushed to the back-burner, but for the few, the proud, who have been patiently waiting all season for fireworks, the maniacs of the MotoGP world have come through in spades.

What an amazing one-two punch in Australia and Malaysia!  The Phillip Island circuit, perched above the sea with a backdrop that rivals Pebble Beach, has always been one of the best on the GP calendar with a series of cringe worthy high speed corners that separate the men from the boys.  Even a processional race is enjoyable to watch on that track, but the 2015 edition Down Under was unequivocally, The Motorsports Race of the Year (or MROY)!

If you are reading this I trust that you have watched it, if not, go now immediately to a media outlet where you can watch every single second of that race.

Australia had all of the ingredients for racing perfection:  A four man breakaway including the two title contending teammates, 3 makes of bike, each with major strengths and weaknesses that the riders could exploit lap after lap to their advantage, animal interference, 52 passes among the lead pack, and on the last lap of the race, Marc Marquez making up an impossible amount of time to catch and pass Jorge Lorenzo with two corners remaining with a forceful slide job up the inside.  Just a few yards behind the battle for the win, Andrea Iannone executed an equally remarkable pass on 9 time World Champion Valentino Rossi to cap off the ride of his lifetime.  It was equal parts thrilling and terrifying as these four brave men let it all hang out and remarkably came home in one piece.  And yes, I was so worked up I watched the last lap in a defensive stance while making animated air sucking noises and hushed battle cries, much to the chagrin of my poor wife. 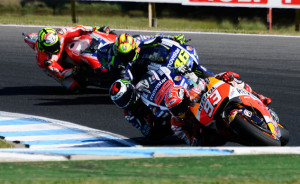 If you followed the post race interviews and the lead up to Malaysia days after the race, the stage was set for a battle royal between Rossi and Marquez after Rossi accused Marquez of seeking revenge for a couple of clashes earlier in the season between the pair by purposely manipulating the Australian race to give Lorenzo the championship advantage.  In the moment it felt like Rossi was succumbing to the mounting championship pressure and was looking to blame others for his poor result rather than looking inward.  Could Marquez have been so cunning that he impeded Rossi in the closing laps and pulled off the miracle victory?  He did set the fastest lap of the race on the last lap on worn tires while also having to go off line to get Lorenzo in turn 10.  It was certainly something to ponder as the circus headed to the penultimate round of the championship.

Fast forward to mid race of the Malaysian GP and following a Hollywood style script that even Sly Stallone could have penned (sorry I’m still upset over Driven), we suddenly found Rossi stuck behind Marquez as Lorenzo was setting off in pursuit of Pedrosa for the win.  This was the critical moment in the race for Rossi to stay in touch with his teammate to protect his slim championship lead, but as fate would have it, he was going to have to go through a fired up Marquez looking for a fight.

And what a fight it turned out to be.  Those in the Rossi camp suddenly saw justification for their argument as Marquez almost played with Rossi as they spectacularly passed and re-passed each other around the 3.445 mile, 15 turn Sepang Circuit. On lap 5 alone they set a MotoGP record for making 9 passes. (yes 9).   It was ballsy stuff that again had me sucking air like a fish out of water.  Rossi was imploring Marquez like a peloton leader in the pedal bike race to fall in line and work together so they could catch the vanishing leaders, but Marquez seemed content to put on a display of machismo.  You could feel the disgust in Rossi by his body language and it seemed inevitable that the big one was coming for one or both men, when suddenly, Rossi sat up mid corner with Marquez pinned to his outside, slowly rolled the bike to the edge of the track, looked at Marquez eye to eye and……..Karate Kicked Him!

Down went Marquez like a sack of potatoes as Rossi accelerated off into the distance.  Was it a Euro soccer flop or did Rossi really pack enough punch to drop the champ? The crowd was roaring over the sound of the bikes.  This was James Bond movie stuff.  This was Schumacher blatantly driving into the side of Villeneuve in Jerez, Prost and Senna taking each other off in Suzuka.  The tv view of Marquez’s father going bonkers in the garage was priceless.  It seemed a certainty that Rossi was going to be black flagged but the officials let him continue on to take a controversial 3rd place.

As the dust has finally settled, Rossi will now have to start at the back of the grid for the finale next weekend at Valencia with a 7 point cushion over Lorenzo.  It will no doubt be thrilling to watch Rossi carve his way into contention and will likely go down to the last lap.  If Lorenzo wins, Rossi has to be 2nd to clinch.  If Lorenzo is 2nd, Rossi has to be 3rd.  If the Honda’s dominate and Lorenzo finishes 3rd, Rossi just has to be 6th or better.  Thank you MotoGP!

I confess, I’m bored with F1 at the moment, but the last two races in Sochi and Austin have had their moments.  It was wonderful to see the Red Bulls jump all over the Mercedes boys in Austin early in the race in the drying conditions and briefly lead.  In Russia, the safety car tire strategy that Perez and Ricciardo employed set the table nicely for a 4 man battle for 3rd that ended on the final lap when Kimi pretended to be a buzzed teen at a local K1 karting center and punted Bottas, handing Perez a much deserved podium.  Perez has been driving beautifully of late and has turned the tables back on Hulkenberg, who seemed to carry a Le Mans victory high into the early summer races.  Mexico will be jumping this weekend!

Turn 3 at Sochi is so cool.  It’s just a long, flat, wide open, 180 degree corner where the cars seem to be loaded up and on the limit for 5 or 6 seconds.

There is really nothing else like it on the calendar.  It’s like they tossed in turns 1-2 from the Milwaukee Mile.

On the subject of wide open 180 degree corners, Austin’s Turn 16-18 is a nice complex, but the three I long for are Istanbul Turn 8, The Bosch Kurve at the old Osterreichring and the Peraltada in Mexico City.  I think my dad and I still discuss monthly the day we sat at the exit of the Peraltada for the ‘87 Mexican GP and Senna and DeCesaris got hooked up.  For about 10 consecutive laps, the psychotic Italian in his Brabham stalked Senna in the Lotus through the Peraltada at 175mph never more than 2 inches apart.  It was like they were attached by a small 2 inch wire.  People around us, myself included, were starting to get a little uneasy when we knew they were due on the scene and would visibly flinch as the 2 car train blasted into view just 25 yards away from us.  When suddenly the PA announcer was going nuts over an accident on the other side of the circuit, we all let out a sigh of relief.

At one point during the rain delay in Austin, Will Buxton was talking to Max Verstappen and the subject of Red Bull pulling both teams and three car teams came up.  I immediately got all geeked up and started placing my drivers for next year.  So, knowing who is already signed and who would be unemployed if both Red Bull and Toro Rosso pulled out, here is my fantasy driver lineup:

Haas: Grosjean, Guiterrez, Conor Daly?  (the 3rd Haas seat has to be an American)

Final Note: Congrats to Lewis Hamilton for Title #3!  He definitely belongs in that rarefied air of the all time greats.  I remember loving the Autosport story about the little 10 year old bugger who went up to Ron Dennis at the Autosport Awards banquet and told him he would be his driver one day. 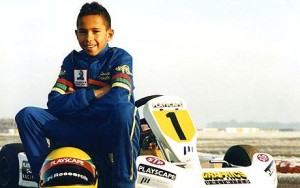 From that moment I’ve been a fan and while he can at times seem like a cocky bastard, he’s an ace behind the wheel and will probably win another 2-3 before he’s done.  Nico is officially his whipping boy and I don’t see why Merc won’t win it again next year.