The 2015 season opening fly-away races are in the books and the teams now head back to their bases for arguably the most important three weeks of the year.  The development race for Barcelona is on and will likely decide how the remainder of the year will play out.  It’s Mercedes vs Ferrari. Renault and Honda working to save face.  Williams trying to keep the mid pack at bay.  I can’t wait to see who has found a couple of tenths to reshuffle the order yet again.

For the drivers it’s time to pack their Speedo swimsuits away for the more temperate climates of Continental Europe and pray that their teams have found the magic solution that will propel them to glory and riches.

Here are some general ramblings:

To Sebastian Vettel (& Ferrari):  I apologize (kind of).  I have publicly flip flopped on Vettel’s driving talents so many times over the past year that I’ve killed any chance of ever running for public office.  I can already see the debate playing out:

Bul Bulifant:  “So in conclusion, my aim is to help Americans collecting false disability get back into the $10/hr working pool to restore some dignity to their lives!”

Opponent:  “That all sounds great but what about a little blog you had years ago where you anointed Sebastian Vettel the equal of Senna, then after one bad season lumped him in with Pastor Maldonado, only to get back on his bandwagon when he restored honor to The Scuderia?  My good people, is this the sort of man you want running your Country?”

Back to Vettel- I had him in my pre season #7 spot and admittedly, the 4 time champ has made a fool out of me.  Ferrari in general have totally surpassed my expectations, much to my delight.  Having the red cars in the game is always great for the sport, particularly when they are the challenger.  There is something that just brings out the passion in all F1 devotees when an underdog Ferrari wins.  It’s as good as it gets.  I’m not about to place Vettel back in the rarefied air of Alonso-Hamilton, but he’s back in ‘the discussion”.

Here is “the discussion” that I have in my head from time to time:

Q: If you were a F1 team manager and could not hire Lewis or Fernando, who would your next three calls be to?

A: Knowing what I know this very second, I would call in order:  Ricciardo, Vettel, Bottas. (sorry Nico).

It appears that after a horrible start, Kimi may have found his rhythm under the desert lights in Bahrain so it will be fascinating to see who gets the upper hand in the team moving forward.  Seb looks to have more outright pace, but Kimi is a metronome over a race distance and may provoke Seb into more errors like we witnessed last weekend.

Credit also to Ferrari’s new technical director, James Allison, who clearly is a guru when it comes to art of designing a car that is kind to it’s tires, and 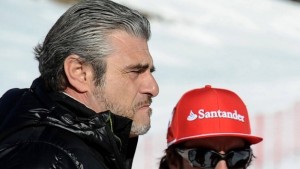 their new Team Boss, Maurizio Arrivabene, who brings some much needed machismo back to keep the ranks fueled with passion.

McLaren:  It was obvious McLaren were in trouble heading to Melbourne, but did you honestly think that they would be 3-4 seconds a lap off the pace?  When they took to the track on the first Friday of the year, I thought I was witnessing the ‘97 Mastercard Lola in the hands of Riccardo Rosett instead of the long awaited reunification of McLaren and Honda.  But credit to McLaren and Honda, they are chopping away at the seemingly insurmountable deficit and suddenly look like they will be a welcome addition to the Force India, Toro Roso, Sauber, Lotus wars by Barcelona.

Here is a quick look at Q1 over the first 4:

As you can see, the gap is coming down significantly and equally impressive, Fernando seems very calm and composed over the situation.  Maybe he’s simply mellowing with age or maybe he knows that Honda are going about their business in the polite Japanese manor of not clobbering the competition right out of the gate and will unleash their true potential in the coming months.  Personally I think this could be the story of the year.  If they can get to the Williams and Red Bulls by year end that will be a phenomenal comeback, equivalent to coming back from 28 down in an NFL game.

On the inter team battle, Button and Alonso look to be evenly matched.  Granted the sample size of 2 races (Fernando missed race 1, Jenson DNS race 4) is too small to draw any real conclusions, but for Button to hang with Alonso for two races is impressive.  Alonso is the undisputed teammate killer.  From his days starting at Benetton he’s crushed:  Trulli, Villeneuve, Fisichella, Piquet, Grosjean, Massa and Kimi.  Only Lewis was able to match the pace of Alonso and if Button can keep it close, that will be a massive achievement and justification that the team was wise to keep the old Brit around for a few years before sending him off to the WEC pastures.

Renault and Red Bull:  What a terrible start to the year!  It’s obvious that Renault have done a very poor job of developing this 2015 engine and are clearly behind Merc and Ferrari, but for all of the Red Bull goons, from Christian Horner all the way up to Dietrich Mateschitz, to publicly bash their partner and threaten to quit the sport entirely if they can’t have their way is despicable.  Did they not just win 4 straight Constructors titles while powered by Renault?  Hasn’t history proved that different makes and manufactures rise and fall from glory?  Afterall, Renault have “only” powered 12 constructors champions over the last 25 years.

It’s a bummer to see Ricciardo stuck battling for 7th place at the moment while the talented Kvyatt is experiencing a horrific beginning to his season, but I expect Renault to make some improvements and the Red Bulls to be mixing it up with the William’s boys soon.

(ed note:  If Baby Dietrich does pick up his toys and “fly’s” away because Renault can’t win every year, I will never order a $27 Red Bull & Vodka in a Las Vegas strip club again.  Do you hear me now Dietrich?  On the bright side, maybe Gene Haas will be able to poach a bunch of RB guys for the soon to be Next American F1 Fiasco.)

Hamilton is #1:  Unfortunately for us, the folks on the couch staring bleary eyed at the screen while scratching, biting and picking, Nico has regressed from last year and Lewis is now the clear cut Number 1 driver for Mercedes.  It seems that last year when Lewis dropped out of the opener and Nico won, Lewis was unsettled and started pressing early due to his deficit in the points and the fact that Nico was remarkably quick in qualifying. This year, it’s the other way around.  Lewis is the relaxed champ doing his thing and Nico is slumping while he tries to come to grips with the pace of Lewis.  Nico desperately needs a win to get his confidence back but with Lewis 4-0 in qualifying and 3-0 in race wins, and the double points race at the end of the year off the table, I’m officially crowning Lewis Hamilton the 2015 F1 World Driving Champion.  Well done lad.  Now just quit spraying down the podium girls with the bubbly.  This isn’t a wet t-shirt contest.

(editors note:  I just had a great flashback to the wet t-shirt contest in the movie “Hot Dog”.  If you have never seen it, do so at once.)

Toro Toro:  The Toro Rosso kids have been mighty impressive.  Poor reliability with the Renault powerplant has let them down but I’m calling both 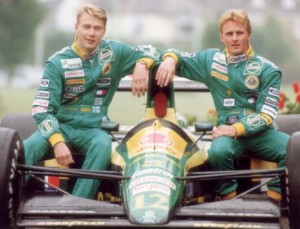 Verstappen and Sainz future F1 winners, and the coolest young paring since Hakkinen/Herbert in the ‘92 Castrol Lotus.  The way they came out attacking in Australia had me believing I was witnessing the next Senna and Prost.  In his first ever Q1 session, 17 year old Max Verstappen was P4!  And not to be outdone, Sainz Jr finished Q3 in P8!  In Malaysia they finished the race P7 and P8 in their Renault powered chassis while the Renault powered Red Bulls finished P9 and P10.  Now before I get too crazy and go online to order a Verstappen helmet hat, I should call out that in Bahrain they did seem to be going backwards.  But my question is, was that a result of the engine just not getting it done or are these two beginners not able to provide the feedback necessary to develop a car?  I’m hoping for a rain race to see what sort tricks they have in store.

Buzzardly Yappings:  Both Sauber and Lotus look to be back with sensible cars after last year’s disasters and Nasr is another rookie who knows how to peddle a race car.  Grosjean is now the steady seasoned pro and Pastor is certifiable Loco en la Cabeza  …….It’s nice to see Williams still competitive after their years out in the wilderness, but I’m fearing that last year was their high point and they will slowly regress back to the midpack when RB and McLaren get their acts together……This new formula works for TV but the thought of a quiet F1 car still doesn’t sit well with me and certainly doesn’t make me want to rush out and buy tickets to travel to Austin for a snoozer.  Although Austin has enough other things going on to make it a great trip no matter how wimpy the F1 cars are now……There goes Bernie again threatening to drop Monza and add Baku.  With Bernie’s current sanctioning fees, I have a hard time understanding why anybody would even consider hosting a F1 race unless, of course, the man behind the race is a small endowed megalomanic trying to capture the love of a Hollywood starlet….On the subject of financial irresponsibility, why would 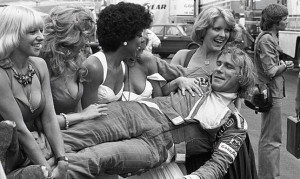 somebody invest in keeping the former Maurissa (now Manor) team going?  My only thought is that Stephen Fitzpatrick must be trying to emulate the legendary Lord Hesketh and have an excuse to throw parties at races…….What happened to blue chip sponsors?  I know the sport took a massive hit when tobacco advertising was banned worldwide, but one would think with the US markets trading near all time highs and companies flushed with cash, some of these teams would be able to tap into the tech sponsorship pool.  Get some slick salespeople with Brit accents to start setting up some meetings at The Rosewood on Sandhill Rd and sell these young techies on the F1 “cool” factor……Where is Schumi??  In this day and age of constant media scrutiny, how has the condition of F1’s all time winner been kept under wraps for so long?  I’m fearful that the lack of news means he’s not doing well but that man is a warrior so I’ll hope for the best.  So sad and a reminder that life can change instantly so I better quit trying to be an amatuer F1 journalist here and get out side and enjoy the day.

Let’s hope for a great show in Spain and I’ll get back to you for more buzzardly talk before Monaco.